skip to main | skip to sidebar

This guitar is for sale - please contact:
info@eveguitars.co.uk
Posted by Douglas Mullen at 5:02 pm No comments: 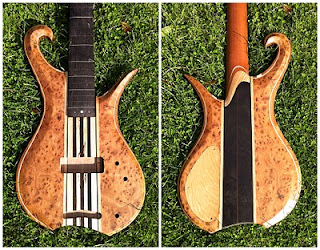 Posted by Douglas Mullen at 1:46 pm No comments: 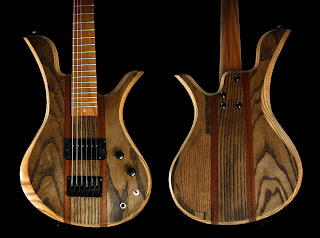 Posted by Douglas Mullen at 5:05 pm No comments:

The site has been updated with new pics!

http://www.eveguitars.co.uk
Posted by Douglas Mullen at 12:44 pm No comments: 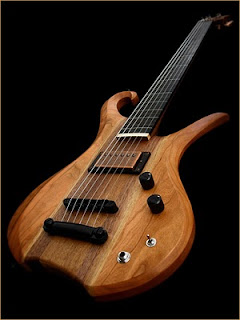 Finally finished! Check the site soon for more pictures of this guitar!
Posted by Douglas Mullen at 3:13 am No comments: 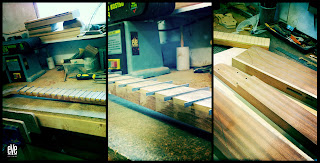 Fretless 4 string bass & Mahogany body in the works...
Posted by Douglas Mullen at 6:43 pm No comments: 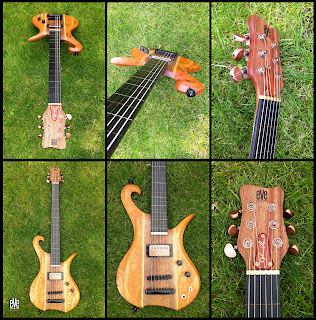 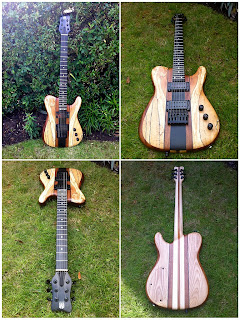 The birth of Eve

I was looking for a present for my 60th birthday, my mind wandered into the realms of a bespoke guitar. My current guitars are a PRS and an American Richie Sambora Strat, my last was a Gibson Les Paul Signature which I had for over 20 years, time for something new I thought.

I’d met Dougie who runs Eve Guitars, and was very impressed with his work, and asked if he would be interested in making a six string electric for me. From the outset the guitar was tailored-made to my spec, (with his advice of course,) soon he was sending emails of guitar shapes, sizes, wood types, pick-ups, machine heads, bridges etc.

The joy being that there was nothing that couldn’t be done, it was ‘imagination and beyond.’ He took me to see his workshop, here he introduced me to a world of different woods explaining the benefits gained from each one for maximum sustain and depth of sound quality. Woods chosen, shape chosen, hardware chosen I was measured, like getting a suit made in the good old days, I daresay if I’d wanted 10 buttons on the cuffs he would have managed it.

The expectation for the guitar was akin to waiting for your child to be born. The day it arrived and I’d arranged to meet Dougie by request, and he presented me with the guitar. I recognised it immediately but it was nothing to actually holding it in your hands and feeling its contours, stroking the superb neck, then playing it, though only acoustically, you immediately know it belongs to you, it’s yours. Not by ownership but you feel it belongs in your hand.

I cannot recommend this experience enough, the time the effort, attention to detail, the incredible workmanship takes the guitar onto a brand new level. You know that no one anywhere else on the planet will have another guitar that looks, feels or plays the same. If I never play it on stage, I thought, for the rest of my days I can hang it on the wall and just look at it, take my word for it, it is a work of Art.

(P.S. I played it live for the first time at my son’s wedding and it sounds as good as it looks, and that’s saying something!)

Gordon is a singer songwriter and has been playing in bands in the East Coast of Scotland for over 40 years. He also wrote and performed in two musicals – ‘Devil’s Rock’ at the Dundee Rep and ‘The Heart of Gold’ at the Edinburgh Festival Fringe 2006.

Posted by Douglas Mullen at 7:43 pm No comments:

The Eve Guitars website is up! Only a couple of pages are still under construction, but there is enough to get started! http://www.eveguitars.co.uk/
Posted by Douglas Mullen at 12:49 pm No comments: 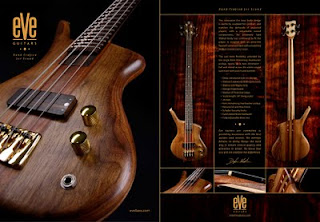 Posted by Douglas Mullen at 5:02 pm No comments: 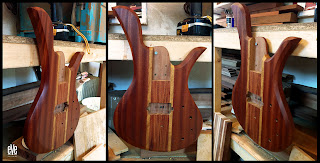 Made from the finest materials, Eve guitars are individually hand built and finished to satisfy the most demanding professional.
If you would like more information, please contact:
info@evebass.com